Pharmacy Benefit Manager (“PBM”) contracts continue to get more complex. Changing drug prices based on AWP, MAC and other algorithms, patent expirations, ever increasing rebates as percent of paid claims, exclusions and reclassification of drugs as single source, limited distribution or specialty drugs create the potential of errors that can cost millions.

As a result, it has become almost impossible to truly know if your plan is not overpaying and all hard-negotiated savings are delivered. With many clients paying tens of thousands of claims only a thorough retrospective audit would be able to determine if all that was promised also has been delivered. Unfortunately, the audit process is time consuming with issues only being identified months after the fact. Once identified, it requires PBM confirmations and often lengthy “haggling” even to recover any agreed to adjudication errors.

This is situation can be dramatically improved through Continuous Monitoring. The CM process is simple: Claims are brought as incurred on a daily, weekly, or monthly basis and reviewed electronically right away using sophisticated software. At the end of each review period, the information can help you take action as it reveals:

For one large provider of rehabilitation and acute care services with over 40,000 plan members, there were several concerns about the new PBM contract. First, the new contract was supposed to deliver millions in savings, which was encouraging but difficult to validate. Secondly, previous benefit audits had shown delays in discounts, resulting in overpayments during the year and large settlements after year-end.

With invoices for over 35,000 monthly claims, representing many new and different drugs often with changing prices, how was the client going to be able to determine if the new contract was performing? Were savings delivered? And experience already showed that discount levels in the beginning of the plan year were often too low followed by higher discounts later in the contract year to compensate for a shortfall. These fluctuations resulted in overcharges early in the year, hurting some members, in particular those with HDCD plans. And for the plan itself, fluctuations in discounts disrupt cash flow not to mention lengthy discussion after close of the plan year to request adjustments to offset PBM underperformances.

Annual audits did identify the shortfalls very accurately but came with delays and unresponsive PBM’s had resulted in overcharges that had to be written off. So, to get ahead of the game, we combined the fact-based accuracy of audits with the speed of CM: As claims come in during the year, they now get reviewed and performance monitored on a monthly or quarterly basis, not when the year is over. As a result, the client works with the PBM to address issues during the plan year. Working with the PBM, the refunds were already calculated by the end of the first year, resulting in over $875,000.00 in refunds that otherwise might have been missed. And in the second year, after the first quarter, the PBM showed perfect discounts for non-specialty products and adjusted its pricing schedule already starting Q2 when the data showed that specialty pricing was off by more than $250,000.00. 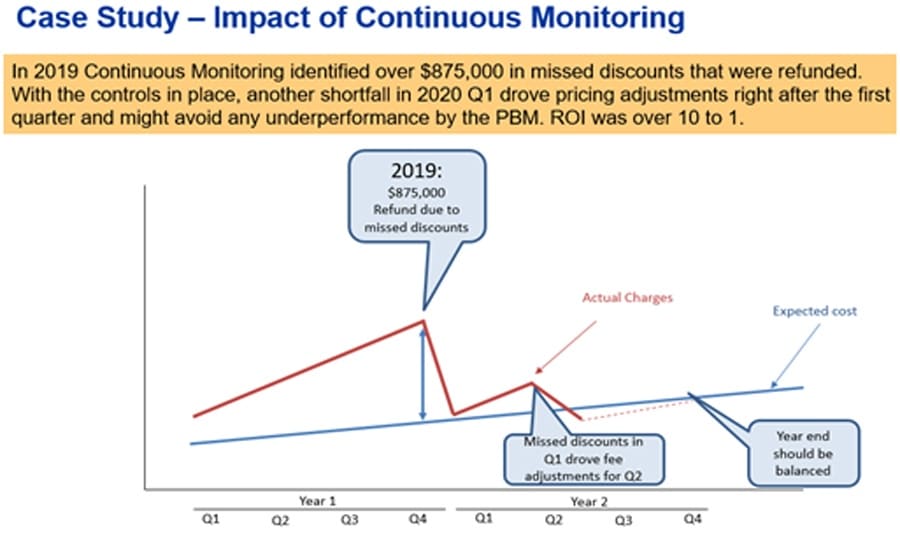 The Continuous Monitoring Service guaranteed that over $875,000 in missed discounts were refunded to the client quickly after close of the year, and much earlier than normally would have been the case. Additionally, the client now uses the data throughout the year to see if all invoices are correct, and track much they are saving. When there are discount or other issues, they have the peace of mind that they can spot these early on and work with their vendor to find solutions.

In this case, year one was settled quickly and for year 2 they are well on their way to avoid another $1 million discount shortfall. As it was determined that specialty drugs discounts were the problem, the fee schedule was changed in Q2. It all adds up, and, last but not least, the refunds alone paid over 10 times for the cost of the CM Service, giving the client a 10: 1 ROI in addition to peace of mind of a well running plan.